On this day in 1945, after two atomic bombs had been dropped on his country, Emperor Hirohito of Japan addressed his nation in a radio broadcast.  The speech was notable not only because it was the first time that a Japanese emperor had addressed the common people, but also because of its understatement of the situation. 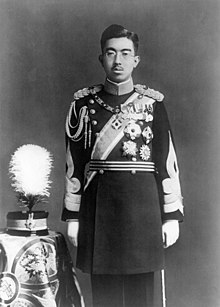 In announcing Japan’s surrender to the Allied Forces, Emperor Hirohito attempted to soften the blow of defeat by understating its effect, saying:

the war situation has developed not necessarily to Japan’s advantage . . . .

Understatement is a rhetorical device use by speakers and writers to deliberately make something seem less serious than it actually is.  It may be used to soften serious matters as in the Emperor’s broadcast, or it can be used for humorous effect.  A classic example of this is in the film Monty Python and the Holy Grail.  After confronting King Arthur and having both of his arms cut off, the Black Knight continues to taunt Arthur with the understatement, “It’s just a flesh wound!”

To be precise, Emperor Hirohito’s understatement is categorized as the rhetorical device called litotes, a form of understatement-by-negative (1). The Oxford English Dictionary defines litotes as “an ironical understatement in which an affirmative is expressed by the negative of its contrary.”  So, for example, imagine Michael Jordan has just hit a 30-foot shot to win the NBA Championship.  You might express your astonishment at the great play.  Or you might use litotes to intentionally understate the play –especially if you’re a fan of the opposing team — by saying, “That Jordan’s not a bad player.”

Today’s Challenge:  The Understatement of the Century
What is an example of a major news story that appeared within the last twenty years that you might intentionally understate?  Generate a list of bad news stories from the past twenty years.  Imagine a spokesperson trying to break the bad news utilizing understatement to soften the blow. (Common Core Writing 2)

Example:  Payton Manning speaking to Denver Bronco fans after losing Super Bowl XLVIII to the Seattle Seahawks by a score of 43-8:  “We got down early and just ran out of time to mount a comeback.  The Seahawks defense was not bad.”

Quotation of the Day:  I have to have this operation. It isn’t very serious. I have this tiny little tumor on the brain. -Holden Caulfield in The Catcher in the Rye.