Today is the anniversary of one of the most important dates in the history of fiction. James Joyce’s novel Ulysses, one of the 20th century’s most important and most controversial novels, takes place on one day: June 16, 1904. The novel tracks the day in the life of three characters, Leopold Bloom, his wife Molly Bloom, and Stephen Dedalus, as they walk the streets of Dublin, Ireland. 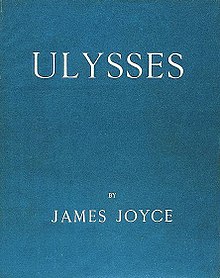 Although the book is set in Dublin, the characters and events parallel Homer’s Greek epic the Odyssey. But Ulysses is not written in verse nor a traditional prose style; instead, Joyce’s novel employs stream of consciousness narration, where instead of moving in a linear fashion, the story flows from the impressions, random thoughts, sensations, and associations of the characters. In an attempt to imitate the natural flow of the characters’ thoughts and dialogue, Joyce omitted conventional punctuation. This, along with the novel’s many allusions to history and literature, make the novel notoriously hard to read.

Here is a brief excerpt of the opening of the novel:

STATELY, PLUMP BUCK MULLIGAN CAME FROM THE STAIRHEAD, bearing a bowl of lather on which a mirror and a razor lay crossed. A yellow dressing gown, ungirdled, was sustained gently-behind him by the mild morning air. He held the bowl aloft and intoned:–

Halted, he peered down the dark winding stairs and called up coarsely:

— Come up, Kinch. Come up, you fearful jesuit.

Solemnly he came forward and mounted the round gunrest. He faced about and blessed gravely thrice the tower, the surrounding country and the awaking mountains. Then, catching sight of Stephen Dedalus, he bent towards him and made rapid crosses in the air, gurgling in his throat and shaking his head. Stephen Dedalus, displeased and sleepy, leaned his arms on the top of the staircase and looked coldly at the shaking gurgling face that blessed him, equine in its length, and at the light untonsured hair, grained and hued like pale oak.

Even before Ulysses was published, it stirred up controversy because of its sexual passages. The novel was banned in the United States until 1933 when a New York judge ruled that the book was not obscene.

Born in Dublin in 1882, Joyce attended Catholic schools in Ireland and earned a degree in Latin. This probably explains his selection of the name of Ulysses for his protagonist, since Ulysses is the Roman name for the main character in Homer’s epic poem, while Odysseus is the Greek name (1).

June 16 is a date where fans of Joyce hold public readings of Ulysses, and in Dublin, fans retrace the steps of the book’s characters.

One resource traces 365 days of “events that did not really happen.” It’s called The Book of Fictional Days by Bob Gordon. Gordon’s book ties each day of the year to events from fiction and film.

Today’s Challenge: What and When It Didn’t Happen

What are the most memorable events from fiction?  If you could memorialize one specific event from fiction on one specific day, what would it be?  Select one unforgettable fictional moment in a book you love.  You may not know the exact day, but describe the specific event, what happened, and why you think it is so memorable.   For example, in Harper Lee’s novel To Kill a Mockingbird the climactic events of the novel’s final chapter — Chapter 31 — occur on Halloween night.  Bob Ewell attacks Scout and Jem. Boo saves the children and stabs Ewell. After seeing Boo in the flesh for the first time, Scout escorts him home.

The following are some additional fictional dates and events from The Book of Fictional Days (2).

February 1:  Willy Wonka gives a tour of his chocolate factory.

February 14:  Sam Baldwin and Annie Reed meet at the Empire State Building in Sleepless in Seattle.

May 1:  Bilbo Baggins and Gandalf return to Rivendell and the house of Elrond in The Hobbit.

May 15:  Horton the elephant hears a small noise in Horton Hears a Who.

Quotation of the Day:  I want to give a picture of Dublin so complete that if the city suddenly disappeared from the earth it could be reconstructed out of my book. -James Joyce

2 – Gordon, Bob. The Book of Fictional Days: A Collection of Events That Did Not Really Happen. Korea: Tide-mark Press Ltd., 2003.  http://lithub.com/50-fictional-days-immortalized-in-literature/

On this day in 1846, the United States and Britain signed the Treaty of Oregon, which established the 49th parallel as the international boundary separating British North America and the United States’ Pacific Northwest.  Beginning in 1818, the Oregon Territory — the region which today covers British Columbia and the states of Washington, Oregon, and Idaho — was jointly occupied by the United States and Britain. In 1844, little known Democratic candidate for president James J. Polk ran a campaign based on the expansion of the United States and the fulfillment of the nation’s manifest destiny.  Polk’s slogan was “Fifty-Four Forty or Fight!” based on his campaign promise of expanding U.S. territory to the northern boundary of the Oregon Territory at latitude 54 degrees, 40 minutes. 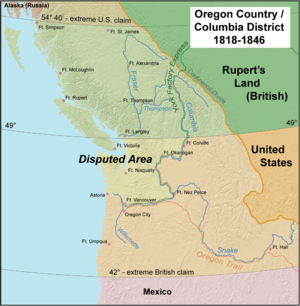 Once Polk won the presidency, however, he became less bellicose.  Facing the prospect of a war with Mexico in the south, Polk sought to avoid a potential war with Great Britain by agreeing to a compromise that extended the 49th parallel border from the Rocky Mountains to the Pacific Ocean.

Parallelism is a big word for a simple concept:  It simply refers to the repetition of structure within a sentence or paragraph.  Notice, for example, how the following words from John F. Kennedy’s 1960 inaugural address are coherently packed into a single sentence using parallel verb phrases:

Let every nation know, whether it wishes us well or ill, that we shall pay any price, bear any burden, meet any hardship, support any friend, oppose any foe, in order to assure the survival of the success of liberty.

Notice how each three-word phrase follows the same pattern of VERB – ADJECTIVE – NOUN.  Notice also how the repeated structure creates balance and rhythm and clarity.

This nation, under God, shall have a new birth of freedom — and that government of the people, by the people, for the people, shall not perish from the earth.  -Abraham Lincoln

The only thing we have to fear is fear itself — nameless, unreasoning, unjustified terror which paralyzes needed efforts to convert retreat into advance.  -Franklin Delano Roosevelt

Even a simple park sign can demonstrate how parallelism can communicate ideas more clearly.  Notice which part of the list below breaks the parallel pattern:

By changing “PICK-UP LITTER” to “NO LITTERING” we now have a more balanced and clear list:

Writing a sentence is like packing a suitcase.  There is an art to getting everything in the bag — not just getting it in, but keeping it all organized and accessible.  Parallelism is the secret weapon for writers who pack sentences, not suitcases. It helps them to pack a lot of ideas into a sentence in an orderly, logical way.

Parallel structure, fully understood and put to use, can bring about such a startling change in composition that student writers sometimes refer to it as “instant style.”  It can add new interest, new tone, new and unexpected grace to even the most pedestrian piece of writing.

Today’s Challenge:  I Came, I Saw, I Conquered Parallelism

Mourning his dead father, berating his clueless mother, and continually contemplating the murder of his remorseless, treacherous, and lecherous uncle, Hamlet is not having a good day!  Something, indeed, is rotten in the state of Denmark, and it’s not just the fish from last week’s dinner that has been festering in the corner of the Castle Elsinore’s kitchen.

Quotation of the Day:  All writers fail, on occasion, to take advantage of parallel structures.  The result for the reader can be the equivalent of driving over a pothole on a freeway.  What if Saint Paul taught us that the three great virtues were faith, hope, and committing ourselves to charitable work? -Roy Peter Clark