On this day in 1854, Britain’s Poet Laureate Alfred Lord Tennyson published his poem “The Charge of the Light Brigade.”  The poem recounts a horrific episode at the Battle of Balaclava during the Crimean War.  On October 25, 1854,* the British Light Brigade rode into battle against Russian forces.  Following an ambiguous order to attack, the soldiers of the British cavalry were mowed down by Russian field artillery as they charged across a treeless valley.  Of the 673 British horsemen who made the charge that day only 198 survived (1). 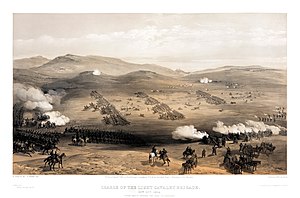 Tennyson is said to have written his famous narrative poem in just a few minutes after reading an account of the battle in the newspaper.  The six-stanza poem immediately became popular, and even today its famous lines capture the plight of common soldiers, nobly and courageously following the orders of their superior:

Theirs not to make reply,

Theirs not to reason why,

Theirs but to do and die:

Into the valley of Death

Narrative poetry is probably the oldest form of poetry there is.  A narrative poem is a poem with a plot, a plot which centers around characters, conflict, and setting.

The most common forms of narrative poems are the short form known as a ballad and a long form known as an epic.  According to Edward Hirsch in his book A Poet’s Glossary, these poems are some of our oldest forms of storytelling:  “Both ballads and epics originated in prehistory as forms of oral poetry.  They were sung aloud, created — and re-created — by individuals performing with a participating audience” (2).

What event from today’s news is worthy of immortalizing in verse?  Read Tennyson’s poem carefully, noticing how he tells the story of The Charge of the Light Brigade (3).  Then, like Tennyson, read a story in today’s newspaper, and write a short narrative poem that captures the key elements of the story. (Common Core 3 – Narrative)

Quotation of the Day:  If history were taught in the form of stories, it would never be forgotten. -Rudyard Kipling