Today is the birthday in 65 BC of Roman lyrical poet and satirist Horace.  On this day we express our gratitude to Horace for a single word — sesquipedalian, which means “a long word” or “a person known for using long words.” 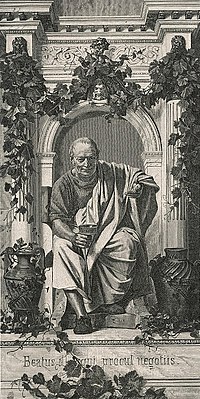 Horace penned his verse in Latin.  In his Ars Poetica (The Art of Poetry) he wrote the following:  Proicit ampullas et sesquipedalia verba, which translates, “He throws aside his paint pots and his words that are a foot and a half long.”  Combining the Latin roots sesqu- (one and a half) and ped (a foot), this adjective provides the perfect slightly exaggerated image for words that are wide.  Like many English words derived from Latin, especially many of the longer ones, sesquipedalian was borrowed in the seventeenth century (1).

George Orwell gave good advice to writers in his famous essay “Politics and the English Language” when he said, “Never use a long word when a short one will do.”  However, sometimes a long word is the best word, especially when it has precise meaning.  Polysyllabic words may be long, but they also can pack a lot of meaning into a small space.  In his book 100 Ways to Improve Your Writing, Gary Provost calls these polysyllabic words “dense words”(2).  Dense words allow a writer to say in one word what would normally require many words.  For example, notice how in the sentence below, ten words can be swapped out for a single word:

Original:  The politician was guilty of being evasive, using many words when fewer were called for.

Revision:  The politician was guilty of circumlocution.

What are some examples of words that are at least 10 letters long, words that pack a lot meaning into a single word?  Using a good dictionary, identify at least 8 words that are each at least 10 letters long.  Record your list of words along with a definition of each one.  Also record the number of words in the definition.  Then, write your verdict of whether or not each word is a dense word.  To judge each word, ask and answer the following questions:  Does the word crowd enough meaning into a small enough space to be declared dense?  Is it truly a heavyweight word?

Below are some examples of dense words:

Quotation of the Day: Life grants nothing to us mortals without hard work.