Today is the birthday of linguist and social critic Noam Chomsky, who was born in Philadelphia in 1928.  Chomsky spent more than 50 years as a professor at MIT and has authored over 100 books.  Chomsky has been called “the father of modern linguistics” and is one of the founders of the field of cognitive science.  Despite all of his accomplishments, Chomsky is perhaps best known for a single sentence: 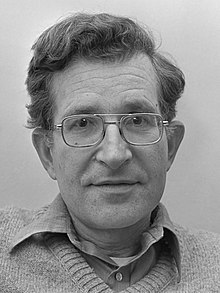 Published in his 1957 book Semantic Structures, Chomsky’s famous sentence illustrates the difference between two essential elements of language:  syntax and semantics.  Syntax relates to the grammar of a language or the order in which words are combined.  Semantics, in contrast, relates to the meaning of individual words.  Chomsky’s sentence illustrates the difference between syntax and semantics, showing that a grammatically or syntactically correct sentence can be constructed that is semantically nonsensical.

Begin by brainstorming as many adjectives, nouns, verbs, and adverbs as you can.  Then, select randomly from your list, filling in words in the following order:

Generate a number of sentences until you create one that’s so outrageous that it belongs on a T-shirt. (Common Core Language 3 – Knowledge of Language)