On this day in 1998 the computer-animated film A Bug’s Life was released. The film was produced by Pixar Animation Studios and distributed by Walt Disney Studios.  The film, which was directed by John Lasseter and co-directed by Andrew Stanton, featured the music of Randy Newman and the voices of Dave Foley, Kevin Spacey, and Julia Louis-Dryfus (1). 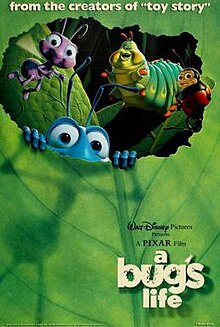 The plot of the film is based on a retelling of one of Aesop’s fables:  The Ant and the Grasshopper:

One bright day in late autumn a family of Ants were bustling about in the warm sunshine, drying out the grain they had stored up during the summer, when a starving Grasshopper, his fiddle under his arm, came up and humbly begged for a bite to eat.

“What!” cried the Ants in surprise, “haven’t you stored anything away for the winter? What in the world were you doing all last summer?”

“I didn’t have time to store up any food,” whined the Grasshopper; “I was so busy making music that before I knew it the summer was gone.”

The Ants shrugged their shoulders in disgust.

“Making music, were you?” they cried. “Very well; now dance!” And they turned their backs on the Grasshopper and went on with their work.

No one knows for certain if Aesop actually lived, but some ancient historians report that he was a slave who lived either in the 5th or 6th-century B.C.  Whether he actually lived or not, today we have over 300 fables, each with a plot the centers on animals and a moral that applies to the human reader (2).

Walt Disney made a cartoon-short of “The Ant and the Grasshopper” in the 1930s, but when Pixar got ahold of the the story in the 1990s, they turned the short fable into a full fledged film, featuring a full colony of ants and a rowdy gang of grasshoppers.

Quotation of the Day:  Because philosophy arises from awe, a philosopher is bound in his way to be a lover of myths and poetic fables. Poets and philosophers are alike in being big with wonder. -Thomas Aquinas