On this day in 1975, the SS Edmund Fitzgerald, a bulk freighter, sank in a storm on Lake Superior.  The entire crew of the Fitzgerald, 29 men, were lost. Approximately two weeks after the tragedy, singer songwriter Gordon Lightfoot read a short Newsweek magazine article on the ship’s sinking.  The first lines of the article read:

According to a legend of the Chippewa tribe, the lake they once called Gitche Gumee ‘never gives up her dead.’ (1) 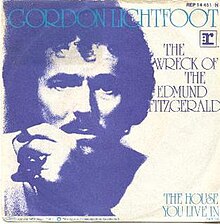 Inspired by the article and the plight of the Fitzgerald and its crew, Lightfoot began writing what was to become one of popular music’s most recognizable ballads, “The Wreck of the Edmund Fitzgerald.”  The opening lines of the song’s lyrics, clearly show the influence of the Newsweek article:

The legend lives on from the Chippewa on down

Of the big lake they call Gitche Gumee

The lake, it is said, never gives up her dead

When the skies of November turn gloomy

Almost one year to the day of the appearance of the article in Newsweek, the song became a number one hit in Lightfoot’s native Canada; the song peaked at number 2 on the U.S. Billboard charts (2).

Gordon Lightfoot is certainly not the only songwriter to mine newspapers and magazines for ideas:

-The lyrics of the Beatles song “A Day in the Life” were inspired by two separate stories that John Lennon read in London newspapers.  One about a fatal car accident and the second about a road survey that revealed 4,000 pot holes in the roads of Blackburn, Lancashire.  The song’s opening line is:  “I read the news today, oh boy.”

-Alicia Keys’ song “Girl on Fire” was inspired by a magazine article that Keys read about herself.  The article’s writer Jeannine Amber used the phrase “girl on fire” to describe the singer.  The phrase had such an impact on Keys that she used it not only for inspiration for a song, but also as the title of her fifth studio album.

-The Elvis song “Heartbreak Hotel” was inspired by a newspaper story about a suicide note.  The man who killed himself left a note that said, “I walk a lonely street.”  This inspired the song’s opening lines, written by Tommy Durden:  Well, since my baby left me, I found a new place to dwell.  It’s down at the end of lonely street at Heartbreak Hotel.

-The 1973 Tony Orlando and Dawn hit “Tie a Yellow Ribbon Round That Old Oak Tree” was inspired by a 1971 story in the The New York Post about a convict returning from prison.  In the story a white handkerchief was tied around the tree.  Songwriters Irwin Levine and Larry Brown made the change to a yellow ribbon because they felt it made for a better song.  Interestingly, the song went on to inspire a national movement in the 1980s when yellow ribbons became the symbol of American hostages held in Iran.  Fifty-two hostages were held captive for 444 days.

Today’s Challenge:  I Read the News Today
What recent news story might serve as inspiration for a song or a poem?  Look through a recent newspaper or magazine for stories — local, national, or international — that might serve as inspiration for the lyrics of a song or poem.  Use your poetic license as needed to transform the people, places, and events in the news into your own creative work.

Quotation of the Day:  One merit of poetry few persons will deny: it says more and in fewer words than prose. -Voltaire