Today is the birthday of F. Scott Fitzgerald (1896-1940), known for his novel The Great Gatsby as well as numerous other short stories and novels. 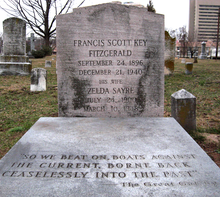 In a 1938 letter to his daughter, Fitzgerald presented his powerful case for what he felt was the English language’s most potent part of speech:

. . . all fine prose is based on the verbs carrying the sentences. They make sentences move. Probably the finest technical poem in English is Keats’ “Eve of Saint Agnes.” A line like “The hare limped trembling through the frozen grass,” is so alive that you race through it, scarcely noticing it, yet it has colored the whole poem with its movement–the limping, trembling and freezing is going on before your own eyes (1).

Verbs are the engines of every sentence.  They create movement and action as well as images that your reader can see and hear.  Because verbs are so important, you should learn to select your verbs with care and learn to differentiate between imprecise, passive verbs that suck the life out of your sentences and precise, action verbs that enliven your sentences.

Like Fitzgerald, writer Constance Hale argues confident writers know the importance of vivid verbs:   “More than any other part of speech, it is the verb that determines whether the writer is a wimp or a wizard.“  Hale believes so strongly about verbs, in fact, that she wrote on entire book on them called,  Vex, Hex, Smash, and Smooch.

In her book, Hale talks about a “cheat” she employed as a magazine editor to determine whether or not a writer was up to snuff.  She would begin by circling every verb in the first two or three paragraphs of a submitted story.  Then she would study each verb:

Did the writer rely on wimp verbs?  Or did he craft sentences with dynamic verbs — ‘linger,’ maybe, or ‘melt,’ or ‘throttle’? If ‘is,’ ‘was,’ or ‘were’ filled most of the circles, the story idea was declined.  If the writer relied on dynamic verbs, and in doing so made every sentence jump, he got a phone call (2).

Put Hale’s “Verb Check” to the test by examining the two sentences below.  Notice how how a wimpy verb only tells, while a vivid verb shows, providing both sight and sound:

Sentence 2:  Mary slammed her fist on the desk, lowered her eyebrows into an indignant glare, and stomped out of the room (3).

Today’s Challenge:  Parts of Speech on Parade
What would you say is the most important single part of speech in the English language, and why should writers pay careful attention to how they use it?  Make your case using sentences from great writers as examples. (Common Core Writing 1 – Argument)

Quotation of the Day:  Verbs act.  Verbs move.  Verbs do. Verbs strike, soothe, grin, cry, exasperate, decline, fly, hurt, and heal.  Verbs make writing go, and they matter more to our language than any other part of speech. -Donald Hall