On this day in 1862, Abraham Lincoln issued the preliminary Emancipation Proclamation, which warned the Confederate states that if they did not rejoin the Union by January 1, 1863, all slaves in those states would be freed.  The Civil War was still raging, but the Union had just claimed a victory at the Battle of Antietam on September 17th, the single bloodiest single-day battle in American history. 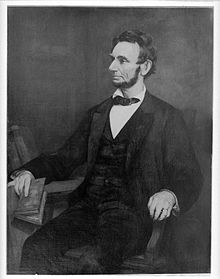 When the Proclamation took effect on January 1, 1863, no slaves were actually freed because it applied only to the Confederate states that were still at war with the Union.  It did, however, change the moral tone of the war, making it not just a struggle to save the Union, but also a battle to support human freedom.  It also set the stage for the Thirteenth Amendment to the Constitution, ratified in 1865, which put a permanent end to slavery in the United States (1).

Quotation of the Day:  I always consider the settlement of America with reverence and wonder, as the opening of a grand scene and design in providence, for the illumination of the ignorant and the emancipation of the slavish part of mankind all over the earth. -John Adams

On this date in 1937, J.R.R. Tolkien’s The Hobbit was published.  Tolkien began the book in a rather unexpected way.  As a professor of Anglo-Saxon at Oxford University, Tolkien would augment his salary in the summers by marking School Certificate exams, a test taken by 16 year-olds in the United Kingdom.  In a 1955 letter to the poet W.H. Auden, Tolkien recounted the moment that launched what was to become a classic in fantasy and children’s literature:

All I remember about the start of The Hobbit is sitting correcting School Certificate papers in the everlasting weariness of that annual task forced on impecunious academics with children. On the blank leaf I scrawled: ‘In a hole in the ground there lived a hobbit.’ I did not and do not know why. 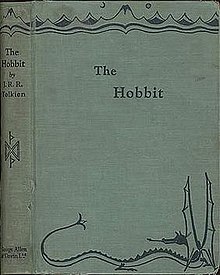 The opening line that Tolkien scribbled on a blank page that fateful day remained intact in the published final draft, followed by a sentence that elaborated a bit on the hobbit habitat:

In a hole in the ground there lived a hobbit. Not a nasty, dirty, wet hole, filled with the ends of worms and an oozy smell, nor yet a dry, bare, sandy hole with nothing in it to sit down on or to eat: it was a hobbit-hole, and that means comfort.

While the book was still in manuscript form, publisher Stanley Unwin gave it to his 10-year-old son Rayner, who wrote the following review:

Bilbo Baggins was a Hobbit who lived in his Hobbit hole and never went for adventures, at last Gandalf the wizard and his Dwarves persuaded him to go. He had a very exiting (sic) time fighting goblins and wargs. At last they get to the lonely mountain; Smaug, the dragon who guards it is killed and after a terrific battle with the goblins he returned home — rich!

This book, with the help of maps, does not need any illustrations it is good and should appeal to all children between the ages of 5 and 9.

Rayner’s favorable comments were the final confirmation that Urwin needed to publish the book (2).

Today’s Challenge:  From Blank Page to Page Turner
What character and setting would you introduce in the first two sentences of a story?  Grab your own blank piece of paper and draft at least two sentences that introduce a character and a setting for a story.  Hold a contest to see whose novel first lines resonate the most with readers. (Common Core Writing 3 – Narrative)

Quotation of the Day:  Start writing, no matter what. The water does not flow until the faucet is turned on.  -Louis L’Amour

Today is the birthday of Donald Hall, American poet and the 14th U.S. Poet Laureate. He was born in New Haven, Connecticut in 1928, and when he was only sixteen, he attended the Bread Loaf Writers’ Conference. In his 50-year career as a writer, Hall has published poems, essays, letters, children’s books, and literary criticism (1).

In 1985 Hall wrote a short essay for Newsweek‘s “My Turn” column entitled “Bring Back the Out-Loud Culture” where he challenged readers to return to reading and reciting aloud:

Good readers hear what they read even though they read in silence: speed reading is barbaric. When we read well, in silence, we imagine how the words would sound if they were said aloud. Hearing print words in the inward ear, we understand their tone. If we see the sentence “Mr. Armstrong shook his head,” the inner voice needs to understand whether Mr. Armstrong disapproved or was outraged — before the inner voice knows how to speak the words.

If when we read silently we do not hear a text, we slide past words passively, without making decisions, without knowing or caring about Mr. Armstrong’s mood. We might as well be watching haircuts or “Conan the Barbarian.” In the old Out-Loud Culture, print was always potential speech; even silent readers, too shy to read aloud, inwardly heard the sound of words. Everyone’s ability to read was enhanced by recitation. Then we read aggressively; then we demanded sense (2).

Although written in 1985, Hall’s words are as true today as ever.

Today’s Challenge: Out-Loud Renaissance
What is a passage of prose or a poem that you feel is worth reading out loud and is worth committing to memory?  What makes it so exemplary and so worth remembering? Challenge yourself this week to commit a favorite poem or passage to memory. See if it helps you pay more attention to the written word.  Sponsor a “Recitation Day” in your class or community, challenging people to share their poems or passages out loud.

Quotation of the Day: We must encourage our children to memorize and recite. As children speak poems and stories aloud, by the pitch and muscle of their voices they will discover drama, humor, passion, and intelligence in print. In order to become a nation of readers, we must again become a nation of reciters. — Donald Hall

On this date in 1783 the first hot air balloon was sent aloft in Annonay, France. The balloon was engineered by two brothers, Joseph-Michael and Jacques-Etienne Montgolfier. 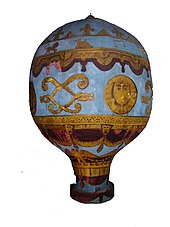 This first flight, however, was not a manned flight. Because of the unknown effects of high altitude on humans, the brothers decided to experiment with animals.  The first passengers in the basket suspended below the balloon, therefore, were a sheep, a duck, and a rooster.  The 8 minute flight travelled about two miles and was witnessed by a crowd of 130,000, which included King Louis XVI and Marie Antoinette (1).

Today’s Challenge:  More Than Just Hot Air
Today is the perfect day to hold a balloon debate, a debate where at the end of each round, the audience votes on one or more speakers to eliminate.  In this debate the audience is asked to imagine that the speakers are travelling in a hot air balloon.  The balloon is sinking, so in order to save everyone, one or more of the speakers must be “thrown out.”

Who would you argue is the most important or influential person in history? You may hold a balloon debate on any topic, but traditionally a balloon debate revolves around each speaker arguing the case of a famous person from history.  Each speaker, then, attempts to persuade the audience why his or her individual is the most important and, therefore, the least likely candidate for elimination.  Precede the debate by holding a draft, where each participant selects an individual to research and to argue for.  Their task then is to write a speech that answers the following question:  Why is this person the most important and influential person in history? (Common Core Writing 1 – Argument)

Quotation of the Day: Freedom is hammered out on the anvil of discussion, dissent, and debate. -Hubert H. Humphrey

Today is the birthday Samuel Johnson (1708-1784), the writer of the first scholarly researched English dictionary.  His work A Dictionary of the English Language was published in two volumes on April 15, 1755.  Johnson’s dictionary was not the first dictionary in English, but what made it special was its use of illustrative quotations by the best writers in English. 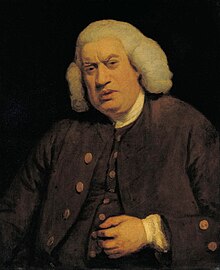 A lexicographer is a writer of dictionaries, and Johnson set the standard for the basic principle that lexicographers use even today, that is deducing the meaning of a word based on how it is used by accomplished, published writers.  Instead of creating meanings of words, the lexicographer reads prodigiously, gathering examples of words used in context in published works.  Only after gathering these examples does the lexicographer write a definition of a word.  Thus, instead of prescribing the definitions of words, the work of a lexicographer is descriptive.  Working objectively, like a scientist, a lexicographer observes (describes) the way words are actually used in the real world by real writers, rather than declaring by fiat (prescribing) what words mean (1).

In Johnson’s Dictionary he define his job as follows:

Lexicographer: A writer of dictionaries; a harmless drudge that busies himself in tracing the original, and detailing the signification of words.

In his preface to his dictionary, Johnson stated his purpose:  not to fix the language by defining its words in print, but to display its power by arranging it for easy alphabetical access:

When we see men grow old and die at a certain time one after another, from century to century, we laugh at the elixir that promises to prolong life to a thousand years; and with equal justice may the lexicographer be derided, who being able to produce no example of a nation that has preserved their words and phrases from mutability, shall imagine that his dictionary can embalm his language, and secure it from corruption and decay, that it is in his power to change sublunary nature, or clear the world at once from folly, vanity, and affectation. (198-9)

Today’s Challenge:  Lexicographer for a Day

What are the key elements of writing a definition?  The act of writing the definitions of words allows you to see the many facets of language that often go unnoticed.  Begin your definition with your word and its part of speech.  Then, identify a general category or class that the word fits into.  Finally, provide details that show what differentiates the word from the other words in its class — in other words, details that show how it is distinct from other words in its general category.

Pencil (Noun):  a type of writing or drawing instrument that consists of a thin stick of graphite enclosed in a thin piece of wood or fixed in a case made of metal or plastic.

Open a dictionary to a random page and write down the first four words you find.  Then, without looking at the definitions, write your own.  Then, compare your definitions to the ones published in the dictionary. (Common Core Writing 2 – Expository)

Quotation of the Day:  What is written without effort is in general read without pleasure.  –Samuel Johnson