Today is the birthday of Laurence J. Peter (1919-1990), the author of the book The Peter Principle. Peter was an education professor at the University of Southern California and the University of British Columbia, but he became famous in the field of business when he published The Peter Principle in 1969. The book is full of case histories that illustrate why every organization seems to fall short of reaching maximum productivity and profit. His explanation relates to the corporate mentality that promotes productive workers upward until they achieve positions beyond their ability to perform competently. 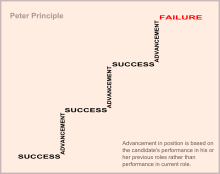 Peter’s insights into the organizational structures of businesses were so well-received that The Peter Principle has gone well beyond just the title of a popular book; it has entered the language as an adage, immortalizing its creator. The American Heritage Dictionary records the following definition of the Peter Principle:

The theory that employees within an organization will advance to their highest level of competence and then be promoted to and remain at a level at which they are incompetent (1).

Laurence Peter is not alone in the world of eponymous laws – a principle or general rule that named for a person.  Below are some examples of other eponymous laws or principles:

Ockham’s Razor:  Explanations should never multiply causes without necessity. When two explanations are offered for a phenomenon, the simplest full explanation is preferable.

Murphy’s Law:  If anything can go wrong, it will.

The Dilbert Principle:  The most ineffective workers are systematically moved to the place where they can do the least damage: management.

Parkinson’s Law:  Work expands so as to fill the time available for its completion.

Stigler’s Law of Eponymy:  No scientific discovery, not even Stigler’s law, is named after its original discoverer (2).

Today’s Challenge:  Laying Down the Law
What are some general rules or principles that you have noticed based on your experience of living in the real world?  Attach your name to the one that you think is the most original and most insightful.  Then, explain and define your law, and give examples of when and where the law comes into play and how it can assist people in living better lives. (Common Core Writing 2 – Expository)

Backman’s Law of Student Speeches:   The likelihood of a sudden, unexpected and unexplainable attack of laryngitis increases the closer a student approaches the period or time when he or she is required to give a speech.

This law helps one anticipate the strange phenomenon which renders students incapable of giving their assigned speeches.  Debilitated by the sudden onset of speechlessness, a student will hobble into class and approach the teacher.  Pointing to his throat and frowning pathetically, the student will then bravely make an attempt to utter a single sentence.  Risking further throat injury, the student will whisper, “I don’t think I’m going to be able -cough! cough! – to go today.” The student will then turn and limp to his seat.  The bout of laryngitis usually ends at the tolling of the class’s final bell, miraculously disappearing just as suddenly as it appeared sixty minutes earlier.  Multiple medical studies by reputable research centers have failed to determine a reasonable cause for this debilitating yet temporary affliction; however, a team of research scientists at John Hopkins is currently conducting a study that promises to produce some breakthrough findings.

Quotation of the Day: A pessimist is a man who looks both ways before crossing a one-way street. –Laurence J. Peter