Today is the birthday of Ambrose Bierce, American journalist and short-story writer. He was born in Ohio in 1842, and after serving in the Civil War he traveled west. He rose to prominence as a journalist in San Francisco. His best-known work of fiction is a short story called An Occurrence at Owl Creek Bridge, a war story about the last thoughts of man before his execution. 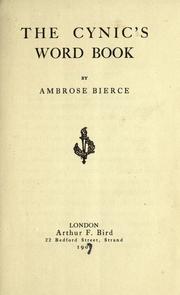 Bierce’s best know work though is his Devil’s Dictionary, a satirical work featuring definitions that display Bierce’s sardonic, piercing wit. Bierce began publishing his definitions as a part of his newspaper column in 1875 and continued until 1906. A complete collection of words and definitions was first published in 1911.

Here are some samples of the definitions:

Bigot: n. One who is obstinately and zealously attached to an opinion that you do not entertain.

Cynic: n. A blackguard whose faulty vision sees things as they are, not as they ought to be. Hence the custom among the Scythians of plucking out a cynic’s eyes to improve his vision.

Dictionary: n. A malevolent literary device for cramping the growth of a language and making it hard and inelastic. This dictionary, however, is a most useful work (1).

Year: n. A period of three hundred and sixty-five disappointments.

The Devil Made Me Define It

Given the definitions below from Bierce’s Devil’s Dictionary, see if you can come up with the appropriate word.

Today’s Challenge:  The Glass is Half Full and Half Empty
What are some examples of nouns that you would find in a book called ‘The ABCs of Life’?  Select five nouns that represent universal aspects of human experience, such as school, walking, breakfast, parents, and job.  Next, generate two contrasting creative definitions for each of your words.  For the first, follow Bierce’s example from the Devil’s Dictionary and write a definition that reflects a cynical, pessimistic mindset.  For the second definition, put yourself in a positive, optimistic frame of mind.

–Half Empty Definition:  A tedious way to spend one third of each day in exchange for a few greenbacks.

–Half Full Definition:  A daily opportunity to transform your passion into a livelihood.

Quote of the Day: There is nothing either good nor bad, but thinking makes it so. -William Shakespeare