Today is the anniversary of the patent for the first QWERTY typewriter.

Around 1860 Christopher Latham Sholes, a journalist for the Milwaukee News, began his quest to create a machine that could write words both legibly and quickly on paper. Sholes’ design was not the first attempt at creating a writing machine, but it was the fastest and most efficient model available when he filed for his patent in 1868. 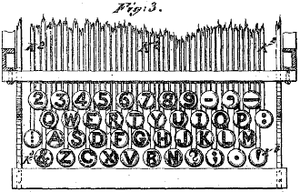 The secret of its speed lay in the keyboard design, which paradoxically slowed the typist down. Sholes arranged the letters in the now familiar qwerty sequence: this forces typists to move their fingers further than was really necessary to type common letter sequences but it gave the keys time to fall back into place after typing (1).

The name type-writer was coined by Sholes, who sold his machine to E. Remington & Sons in 1873. In 1874 the Remington typewriter hit the market at a price of $125. One of the first buyers was Mark Twain who completed the manuscript for The Adventures of Huckleberry Finn on his new machine, becoming the first writer ever to present a publisher with a typed manuscript (2).

Even today, in an era where metal keys have been replaced by electronic word processing, the QWERTY system remains the standard keyboard layout.

Wordplay enthusiasts have an entire category of words related to typewriter order. For example, the word typewriter can be written using just the letters on the top row of the keyboard.

-Other common words that can be written using just the top row: repertoire, proprietor, perpetuity.

-Longest common word that can be typed using only letters from the middle row: alfalfa.

A less esoteric type of typewriter wordplay is called the pangram. Common to students who are learning the keyboard, a pangram is a single sentence that contains all 26 letters of the alphabet at least once, such as: The quick brown fox, jumps over the lazy dogs. A common competition among hardcore word-buffs is to create pangrams with the fewest possible letters. It is possible to create a 26-letter pangram, but it is hard to do without resorting to obscure words and strained syntax; for example, try to decipher this 26-letter pangram: Cwm, fjord-bank glyphs quiz vext.

Here are some other examples of pangrams that use more common words:

Today’s Challenge: Pangrams with a Purpose

How would you summarize your favorite book in a single sentence? Try writing a review/summary of your favorite book or movie in the form of a one-sentence pangram. Don’t worry about the number of letters you use; instead, just make sure you include all 26 letter. (Common Core Writing 2 – Expository)

Quotation of the Day: If the monkey could type one keystroke every nanosecond, the expected waiting time until the monkey types out ‘Hamlet’ is so long that the estimated age of the universe is insignificant by comparison … this is not a practical method for writing plays.  -Gian-Carlo Rota