On this day in 1942, a 13-year-old girl received a birthday gift — a red and white checkered autograph book.  Instead of collecting the signatures of others in the book, the girl decided to use the book as a diary to record her own thoughts. 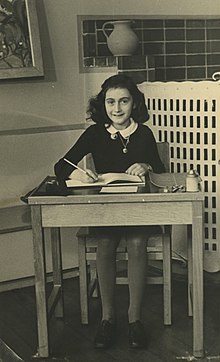 The young girl was Anne Frank, the German-Jewish girl who went into hiding with her family during World War II. She spent 25 months hiding in an annex above her father’s office in Amsterdam before she and her family were betrayed, arrested, and transported to Nazi concentration camps.

While Anne died of typhus in 1945 at the age of fifteen at Bergen-Belsen, the diary that she received for her thirteenth birthday in 1942 was saved and published by her father in 1947. Over five million Jews died in the Holocaust, but through her diary, one voice lives on to remind us that in times of humiliation, degradation, and even during the horrors of war, the human spirit can be triumphant.

In her diary, Anne’s remarkable courage and vivid insights into the human condition live on. Anne’s diary has inspired millions of readers around the world and has been translated into 67 languages (1).

From the very beginning Anne wrote in her diary as if she were talking to an intimate friend; in fact, she even gave it a name, Kitty, and throughout her entries she addresses it by name.

In one of her last diary entries in July 1944, the maturity, wisdom, and honesty of Anne’s voice:

“For in its innermost depths youth is lonelier than old age.” I read this saying in some book and I’ve always remembered it, and found it to be true. It is true then that grownups have a more difficult time here than we do? No. I know it isn’t. Older people have formed their opinions about everything, and don’t waver before they act. It’s twice as hard for us young ones to hold our ground, and maintain our opinions, in a time when all ideals are being shattered and destroyed, when people are showing their worst side, and do not know whether to believe in truth and right and God (2).

Today’s Challenge: Today is the First Day of the Diary of Your Life

What would you say in the first entry of a daily diary that you started today?  You don’t need to wait until your birthday to start a diary. At the end of your day today, take a moment and reflect back on what you did, what you said, and what you heard. Write down anything that you think might be worth remembering, what might be worth a second thought, or what might be noteworthy ten years from now.  If you can’t think of anything to write about, follow Anne’s example and record your reaction to what someone else has said or written.

Here are a few of Anne’s thoughts as examples:

-We all live with the objective of being happy; our lives are all different and yet the same.

-No one has ever become poor by giving.

-Parents can only give good advice or put them on the right paths, but the final forming of a person’s character lies in their own hands.

Quote of the Day: How wonderful it is that nobody need wait a single moment before starting to improve the world. –Anne Frank