On this day in 1963, President John F. Kennedy addressed the nation from the Oval Office proposing that Congress begin the process of drafting a civil rights act.  Many view August 5, 1963, the date of the March on Washington, as the most significant date in the history of civil rights, but because of Kennedy’s speech and because of the other events of that day, June 11, 1963 deserves consideration as the day that launched a revolution in civil rights. 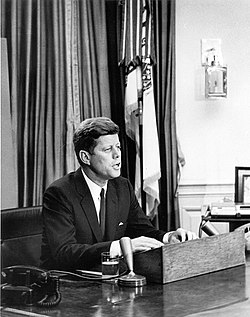 The event that sparked Kennedy’s speech occurred in Alabama earlier in the day.  At the University of Alabama, Governor George Wallace stood in the schoolhouse door attempting to block the entrance of two black students.  For many white Americans in 1963, the issue of segregation was largely a regional political issue.  In the speech he gave from the Oval Office, Kennedy made civil rights a national issue.  In addition, he addressed not just as a political issue but a moral one.

The year 1963 was the centennial of the Emancipation Proclamation, and in his speech, Kennedy linked the plight of African-Americans with the character and the unity of the entire nation:

More than just reporting what was happening in Alabama, Kennedy was inviting all Americans to do something for their country by playing a positive role in the sweeping change.  He was asking Americans to support the kind of actions that would allow the United States to fulfill its promise to all it citizens:

We preach freedom around the world, and we mean it, and we cherish our freedom here at home, but are we to say to the world, and much more importantly, to each other that this is the land of the free except for the Negroes; that we have no second-class citizens except Negroes; that we have no class or caste system, no ghettos, no master race except with respect to Negroes?

Now the time has come for this Nation to fulfill its promise. The events in Birmingham and elsewhere have so increased the cries for equality that no city or State or legislative body can prudently choose to ignore them. The fires of frustration and discord are burning in every city, North and South, where legal remedies are not at hand. Redress is sought in the streets, in demonstrations, parades, and protests which create tensions and threaten violence and threaten lives.

We face, therefore, a moral crisis as a country and a people. It cannot be met by repressive police action. It cannot be left to increased demonstrations in the streets. It cannot be quieted by token moves or talk. It is a time to act in the Congress, in your State and local legislative body and, above all, in all of our daily lives. It is not enough to pin the blame on others, to say this a problem of one section of the country or another, or deplore the facts that we face. A great change is at hand, and our task, our obligation, is to make that revolution, that change, peaceful and constructive for all. Those who do nothing are inviting shame, as well as violence. Those who act boldly are recognizing right, as well as reality . . . .

The old code of equity law under which we live commands for every wrong a remedy, but in too many communities, in too many parts of the country, wrongs are inflicted on Negro citizens and there are no remedies at law. Unless the Congress acts, their only remedy is the street.

I am, therefore, asking the Congress to enact legislation giving all Americans the right to be served in facilities which are open to the public — hotels, restaurants, theaters, retail stores, and similar establishments. This seems to me to be an elementary right. Its denial is an arbitrary indignity that no American in 1963 should have to endure, but many do. (1)

Kennedy’s speech with its moral and forceful tone set the stage for the March on Washington two month later, where Martin Luther King would give his great “I Have a Dream” speech.  In the history books, King’s speech has largely overshadowed Kennedy’s June speech.  However, without Kennedy’s push for and endorsement of legislative action, the Civil Rights Act might not have become a reality.

After Kennedy was assassinated in Dallas in 1963, his successor, Lyndon B. Johnson made Kennedy’s dream a reality, signing the bill into law on July 2, 1964 (2).

Today’s Challenge:  You Say You Want a Revolution
What are the issues today that need reform or change?  What are the specific problems with the status quo, and how might specific revolutionary changes improve the situation for everyone?  Brainstorm some issues that you think might be ripe for reform.  Select one, and identify what the problems are with the status quo, and present possible solutions that might bring about positive change. Write the text of a brief speech presenting the issue, the problems, and your solution.  (Common Core Writing 1 – Argument)

Quotation of the Day:  You see things; and you say “Why?” But I dream things that never were; and I say “Why not?” -George Bernard Shaw

On this day in 323 BC an ancient king and an ancient philosopher died. 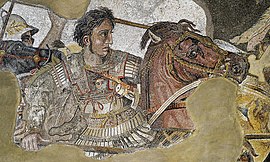 The king was Alexander the Great, the Macedonian general who conquered most of the ancient world.  As a youth, Alexander was tutored by the philosopher Aristotle, and his favorite author was Homer.  Legend says that he slept with a copy of the Iliad and a dagger under his pillow.  After earning his first military victory at the age 18, Alexander fought for the next 15 years with an undefeated record in battle.  When Alexander realized there were no more worlds to conquer, he wept. 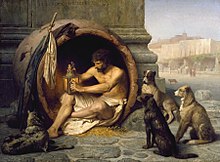 The ancient philosopher was Diogenes the Cynic.  Diogenes believed in living a life free of conventions and constraints.  He eschewed possessions and famously made his home in a large discarded clay jar.  He once owned a wooden cup, but discarded one day when he witnessed a young boy using his cupped bare hands to drink water.  Diogenes was known to walk through the marketplace in the middle of the day carrying a lighted lamp.  When asked why he carried the lamp and inspected the faces of those he met, Diogenes answered, “I am trying to find a man.”

Although these two men died in separate parts of the world — Alexander in Babylon and Diogenes in Corinth — the two men are connected in cultural memory through one of history’s best known anecdotes. 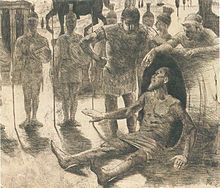 The story goes that the young Alexander once made a visit to Diogenes’ hometown of Corinth.  Everyone flocked to catch a glimpse of the great leader, to hear him speak, and to gain his favor — everyone that is but Diogenes.  Since Diogenes did not come to see him, Alexander determined to make a personal visit to see the philosopher.  Accompanied by a throng of admirers, Alexander approached Diogenes’ home, the large barrel-shaped jar.  Diogenes did not greet the young conqueror; in fact, he didn’t even stand.  Instead, he simply sat up on one elbow.  After a short period of awkward silence, Alexander asked:  “Diogenes, is there anything I can do for you?”

“Yes,” Diogenes replied, “Stand to one side.  You’re blocking the sunlight.”

The crowd was hushed and amazed at Diogenes’ insolence, but Alexander was unphased.  He simply turned away and said quietly, “If I were not Alexander, I should be Diogenes.”

More than one ancient biographer wrote that Alexander and Diogenes died on the same day, June 10, 323 BC.  The exact cause of the two men’s deaths is not exactly clear.  Although it might be expected that the warrior Alexander died in battle, no such report exists.  Instead accounts of his death conflict.  Some say he died of poisoning, others of malaria or typhoid fever.  Only 32 years of age at his death, Alexander’s body was submerged in a vat of honey to stave of decay.

As for the death of Diogenes, there are also conflicting accounts.  One account claims he simply held his breath, another claims he became ill after eating raw octopus, and still another claims he died of infection from a dog bite.

This last possibility is especially ironic, considering that Diogenes’ creed of Cynicism means “doggishness.”  In his History of Cynicism, the scholar R. Dudley explains why the Cynics embraced a dog’s life:

There are four reasons why the Cynics are so named. First because of the indifference of their way of life, for they make a cult of indifference and, like dogs, eat and make love in public, go barefoot, and sleep in tubs and at crossroads. The second reason is that the dog is a shameless animal, and they make a cult of shamelessness, not as being beneath modesty, but as superior to it. The third reason is that the dog is a good guard, and they guard the tenets of their philosophy. The fourth reason is that the dog is a discriminating animal which can distinguish between its friends and enemies. So do they recognize as friends those who are suited to philosophy, and receive them kindly, while those unfitted they drive away, like dogs, by barking at them.

Today’s Challenge:  From History to Story
Who are some great historical figures you would like to know more about?  What are some specific stories that include one or more of these individual?  Brainstorm a list of historical figures who are of interest to you.  Do a bit of research to discover an anecdote about one of them.  Tell the story of a single specific incident using your own words. (Common Core Writing 3 – Narrative)

Quotation of the Day:  Alexander died, Alexander was buried, Alexander returneth to dust, the dust is earth, of earth we make loam—and why of that loam, whereto he was converted, might they not stop a beer barrel?  -Hamlet in William Shakespeare’s Hamlet, the Tragedy of the Prince of Denmark