Today is the anniversary of the publication of a crossword puzzle that might have altered the outcome of World War II. In the spring of 1944 plans were being drawn up for the Allied invasion of France. This highly secretive plan was dubbed Operation Overlord by Winston Churchill, and the invasion was set for June 5, 1944 by the commander of the operation General Dwight D. Eisenhower. 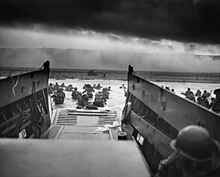 The element of surprise was vital for the success of the invasion, but in May of 1944, British intelligence officers discovered that one of the Daily Telegraph’s crossword puzzles contained two important code names for the beaches of Normandy: Utah and Omaha.

The military became even more concerned when on June 2, 1944, three days before the planned invasion, a crossword puzzle appeared with the name Overlord and Neptune – Neptune was the name of the secret naval operations plan. The author of the puzzle, a schoolmaster by the name of Leonard Dawe, was arrested and questioned. Investigators were unable, however, to determine any explanation, besides coincidence, for the presence of the words in the puzzle.

Forty years after D-Day the mystery was finally solved when National Geographic discovered that one of Leonard Dawe’s pupils had been eavesdropping on the conversations of Allied soldiers and had noted the words, not for malicious reasons, but simply because he thought the words were odd enough to work well in his teacher’s crossword puzzles (1).

-What are two countries with five-letter country names with the middle letter I?  Answer:  China and Haiti.

-Who are two American presidents with five-letter last names with the same middle letter A?  Answer:  Grant and Obama

Quotation of the Day:  As human beings, we have a natural compulsion to fill empty spaces. -Will Shortz